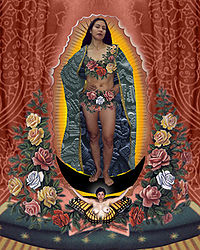 Description of Artwork: Our Lady is a digital photograph representing the Virgin of Guadalupe. While familiar Guadalupe imagery is present-the rays of light, the cloak, the roses, the crescent moon, the angel-the virgin herself is represented by a photograph of a friend of the artist, hands on her hips and head defiantly raised, her robe open and revealing rose-laden undergarments. A topless woman represents the angel below; her arms outstretched and butterfly wings extending from her shoulders and back. According to the artist, the idea was to portray the virgin as a strong and nurturing woman very much like the women in the community that Alma López grew up in.

The Incident: Our Lady provoked much protest from the Catholic community in Santa Fe. The Roman Catholic Archbishop, Michael Sheehan, claimed that the Virgin was depicted as a "tart," is sacrilegious to New Mexicans who have a deep religious devotion to Guadalupe, and should not be shown in a tax-supported museum. Reaction to the work was widespread and heated. A public meeting was held, drawing a crowd of just under 800 to hear an array of speakers and opinions.

Results of Incident: The Museum of New Mexico Committee on Sensitive Materials recommended that the work remain on display. As a compromise, however, the duration of the whole exhibit was shortened by several months.