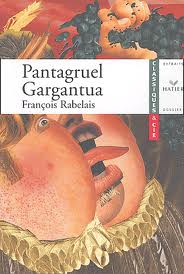 Description of Artwork: Pantagruel and Gargentua 1533: The story of Pantagruel, the giant, son of Gargentua, their feats, their wars and adventures. The framework of a mock-heroic chivalrous romance, he laughed at many types of sophistry including legal obscurantism and hermetic-ism, and was an astute observer of the social and political events of his day

Results of Incident: 1535 Italy-Rome: A Papal bull absolved Rabelais from ecclesiastical censure. 1552 France: Taking advantage of the King's absence from Paris, the divines of the Sorbonne censored the fourth book on publication. 1554 France: Cardinal de Chatillon persuaded Henry II to raise the ban on the works of Rabelais. 1930 United States: The customs Department lifted the ban on all editions with the exception of those with so-called obscene illustrations, specifically Frank C. Pape's drawings for an edition of the Motteux translation. 1938 South Africa-Johannesburg: All works banned.