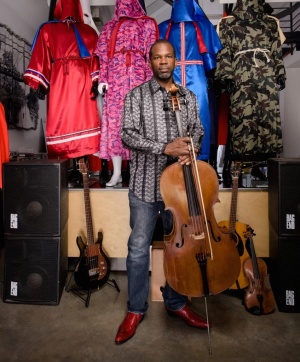 Description of Artwork: Paul Rucker‘s traveling exhibition REWIND is an urgently relevant multi-media installation that addresses the history of racial injustice in America. Works in the show include hand-sewn Ku Klux Klan robes made in colorful Kente cloth, images of lynchings, and slavery-era artifacts.

The Incident: The show opened at York College of Pennsylvania (Aug 31 – Oct 21, 2017) two weeks after the “Unite the Right” rally in Charlottesville, Virginia, which erupted in acts of violence that left three people dead. On September 5th, less than a week after REWIND opened, the President of the college announced the decision to close the exhibition to the general public.

Results of Incident: For the remainder of the exhibition’s run, access was limited to college students and their guests. The college announced the decision on its Facebook page: “The images [in Rucker’s work], while powerful, are very provocative and potentially disturbing to some. This is especially the case without the benefit of an understanding of the intended educational context of the exhibit. As a result, the college has limited attendance to the exhibit.” All traces of the show were scrubbed from the college website and an armed guard was put on duty in the galleries. (see: NCAC.org, October 31, 2017)

Censored on Campus: Paul Rucker’s Exhibition on Race in America. A Conversation with the Artist (Podcast), NCAC, OCTOBER 31, 2017