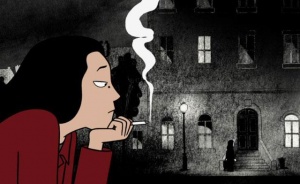 Description of Artwork: "Persepolis" is a 2007 French/American animated film based on Marjane Satrapi's autobiographical graphic novel of the same name. Written and directed by Satrapi with Vincent Paronnaud, the film follows a young girl as she comes of age against the backdrop of the Iranian Revolution. The story ends with Marjane as a 24-year-old expatriate. The title is a reference to the historic city of Persepolis.

The Incident: On October 7, 2011, the privately owned Nessma television station broadcast “Persepolis,” an animated feature film about a girl’s childhood in Iran. The broadcast led to protests and a trial against the station's owner, Nabil Karoui, in Tunisia because it contained a scene depicting Allah, which some consider to be forbidden by Islam.

Results of Incident: Karoui was fined 2,400 dinars (about $1,700) on May 3, 2012 for airing the film. The ruling, which condemned Karoui for "broadcasting a film that disturbs public order and threatens proper morals," followed a long legal battle in a case widely seen as a landmark test of freedom of expression in the country that triggered the Arab Spring. The defence said it plans to appeal the verdict.

The airing of the film prompted attacks on the station's offices and Karoui's home by protesting activists linked to Salafism, a conservative strand of Islam.