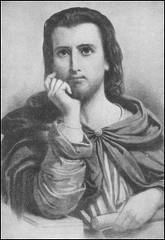 Description of Artwork: Abelard was a French philosopher and theologian. His most popular writings are contained in Theologia Summi Bonni (c.1120), Theologia Christiana (c.1123-24), and Theologia Scholarium. In these works Abelard challenges the Christian belief in the Holy Trinity (the Father, Son and Holy Spirit). The Holy Trinity was believed to be a universal unit by other French theologians. He also argued that one needed basic human reasoning, instead of merely scripture, to understand the relationship between the three separate entities.

The Incident: Abelard's opponents condemned his works and teachings at various times throughout his life. During the 1120s his writings were considered heretical. When he moved to Paris to teach, a former friend, Guillaume de St. Thierry, declared his rhetoric heretical.

Results of Incident: Opponents publicly humiliated Abelard by burning his books and reciting the Nicene creed. He was also imprisoned for a brief period. In 1140 the Pope condemned Abelard to silence. His books were subsequently burned and his followers were confined to religious houses. His work was listed in the Index Librorum Prohibitorum (Index of Prohibited Books) of 1559 and 1564.