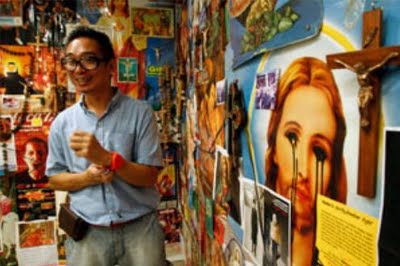 Description of Artwork: Cruz's installation 'Poleteismo' consists of a massive collage of paper cut-outs and three-dimensional objects such as a wooden penis (which protrudes from a portrait of Jesus Christ) and bottles of expensive liquor, representative of the corruption of the Filipino government. Included in the collage are depictions of religious figures, images of prominent politician Imelda Marcos, and Catholic deities "defaced" by cartoon embellishments. Cruz believes that this haphazard confluence of seemingly disparate material speaks to the true nature of the "Filipino condition."

The Incident: Catholic protestors organized against The Cultural Center of the Philippines (CCP), where the exhibit was held. But the resistance to Cruz's work went beyond peaceful protest; the installation was attacked and pieces of it were removed. Following this act of vandalization, Imelda Marcos approached the CCP, armed with a letter from the Catholic Bishops Conference, which expressed outrage that the exhibit was in the CCP. As Marcos said, “It was a shameful exhibit...we built that [the CCP] to be the sanctuary of the Filipino soul and a monument to the Filipino spirit." Marcos cited the bountiful phalluses present in the piece as particularly offensive.

Results of Incident: The resistance by Marcos, the Catholic Bishops Conference, and other associated groups resulted in Cruz's exhibit being shut down by the CCP.