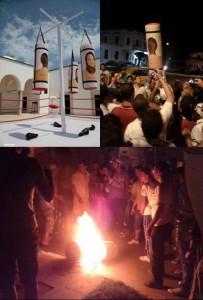 A photo montage of the destruction of Punching Ball by Faten Gabbes, which was one of the pieces at the art fair

Description of Artwork: Several of the artworks were politically charged commentaries on Islam and the new government in Tunisia. One featured a nude woman with a bowl of couscous covering her genitalia, surrounded by bearded men. Another featured a bearded Superman rescuing a bearded victim. The piece by Electro Jaye featured a star of David and a cross, along with the words "Islaic Republic of Tunisia."

The Incident: Hours after the exhibit opened at the Palais El-Abdelia an event organizer asked Jaye to take down a piece of his artwork. Jaye cited censorship as the cause for removing his artwork, whereas one of the organizers, Mr. Sadok Hendaoui, asserted that the whole incident was a misunderstanding. Jaye, Hendaoui asserts, was merely asked to move his piece from the patio to another location in the expo.

As the exhibit continued, however, it drew the attention of several radical Salafist groups, whose leaders called some of the pieces immoral and insulting to Islam. After several days of protests, on the last night of the exhibitions, protestors rioted. Several gained entry into the Palais El-Abdelia, where the exhibition was being held, and burned, tore, or otherwise destroyed several art pieces.

Shortly afterward, Cheikh Houcine Laabidi, the imam of an important mosque in Tunis, spoke out against the artists, saying they should "be killed and their blood be spilled." He rearticulated these sentiments three times in a sermon on June 15. [1]

Results of Incident: Numerous rioters were arrested by the police, and the incident has come to represent the conflict between conservative Salafists and moderate Ennahda political parties, as well as the debate on the proper presence of Islam in the new Tunisian regime after the Arab Spring.

On June 12, Tunisian Minister of Culture Mehdi Mabrouk temporarily closed the Palais El-Abdelia, and announced that six pieces of "provocative" artwork found within were confiscated. However,

Cheikh Houcine Laabidi has been ousted from his functions by the Ministry of Religious affairs, and the artists of the fair intend to sue.