Rage Against the Machine SNL Performance 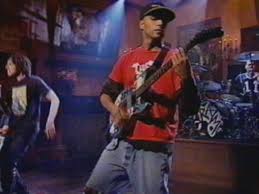 Artist: Rage Against the Machine

Description of Artwork: A musical performance for Saturday Night Live, on an episode hosted by billionaire Steve Forbes. The band was planning to perform their songs "Bulls on Parade" and "Bullet in the Head," and the band's producer, Brendan O'Brien, hung inverted American flags over the band's equipment. Guitarist, Tom Morello, has said the flags "represented our contention that American democracy is inverted when what passes for democracy is an electoral choice between two representatives of the privileged class... this was our way of expressing our opinion of the show's host, Steve Forbes."

The Incident: As Steve Forbes was introducing the band, SNL staff removed the American flags from the band's equipment. They then performed "Bulls on Parade," but after finishing their performance, the band was approached by SNL and NBC officials and told to leave the building. Bass player, Tim Commerford, responded by leaving the torn up remnants of one of the flags in Steve Forbes's dressing room.

Results of Incident: The band was kicked out of the studio and did not get to perform their second song, and Rage Against the Machine was permanently banned from performing on Saturday Night Live.