Right Around the Corner/A Common Ground

< Right Around the Corner 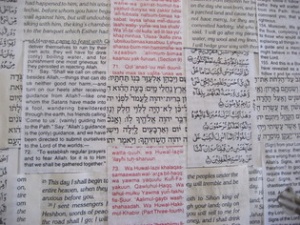 Description of Artwork: Kamler applied to an open call for an innovative artist-organized group exhibition to create interpretive responses to an inactive historic synagogue. After the research phase, he proposed tearing the Hebrew Bible and the Qur’an, weaving/meshing them together into a table covering, and asking representatives of the synagogue and a nearby mosque to jointly examine the mesh of sacred text in a public performance. Other elements were also to be included in a multi-component performance/installation that was not completed.

The Incident: In 2009, the fate of the historic Orchard Street Shul was unclear. The neighborhood had been transformed by 1960s urban renewal efforts, and the Jews, Italians, Ukrainians and other early immigrant groups were no longer in the neighborhood. Religious services at the Shul had been suspended. Artists unaffiliated with the synagogue, intrigued by the combination of history and community, began a collective project, and issued an open call for additional artists. All artists were required to visit the Orchard Street Shul during a research phase in spring/summer 2009, followed by a review of works in progress by a committee of participating artists. No artist was commissioned, and artist organizers also had to submit to the review process. Kamler's multi-faceted proposal included a performance component requiring the willing participation of two Muslims and two Jews from the community, who would publicly interact with a tablecloth constructed of torn texts they consider sacred. Evidence that he had consulted with religious leaders to determine that the work did not violate religious precepts and that community members would participate, was requested but not provided. After several participating artists suggested ways to insure that the community performance component would move forward, he withdrew.

Results of Incident: Kamler’s original proposal was not accepted, based on the review process 3 months before the exhibition. The exhibition, which included a broad array of works by 33 diverse artists, successfully opened to a record crowd of 500 visitors. A catalog published with the exhibit featured essays by prominent scholars.

The picture is a close-up of the tablecloth featured in the artwork.