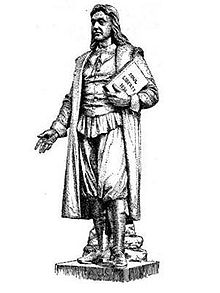 Description of Artwork: Roger Williams was an outspoken advocate of religious freedom, and was one of the first challengers of Puritan Theocracy. His book, The Bloody Tenent of Persecution for Cause of Conscience, clearly set out the reasoning for a complete separation of Church and State. 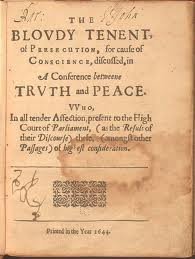 The Incident: Williams was banished from the Massachusetts Bay Colony for his toleration and support for religious diversity, which included, "Jews, Pagans, and Turks." His defiance over state control over religious freedom led to his expulsion from the state in 1635. Williams moved to Rhode Island and founded the city of Providence. After securing his Colony's Charter in England, Williams then wrote and published a book on religious freedom, democracy and intellectual freedom, The Bloody Tenent of Persecution for Cause of Conscience. Published in England in July of 1644 after he had boarded for the return voyage, this book produced a great uproar and Parliament responded in August by ordering the book to be burned by the public hangman.

Results of Incident: In 1936, 300 years after Williams expulsion from the former colony, the state legislature retracted its expulsion order.