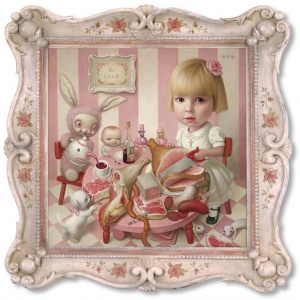 Description of Artwork: Two works by Los Angeles-based painter Mark Ryden: “Rosie’s Tea Party” and "Fountain." Both paintings are of the genre of post-modern Victorian kitsch, referencing the occult and Christian symbolism. “Rosie’s Tea Party” depicts a girl giving a tea party who is cutting a ham inscribed with the words ‘Corpus Christi’ (body of Christ) while wearing a first communion dress and a crucifix around her neck. The image of Jesus graces the label on a bottle of wine. A rabbit pours a teapot full of blood while rats eat the ham off the floor. The other painting, “Fountain,” shows a girl holding her own severed head while her pink dress and white shoes are un-soiled by the blood spurting from her neck stump.

The Incident: Benito Loyola, CEO of local IT company Loyola Enterprises and a member of the Virginia Beach Arts and Humanities Commission, accused Mark Ryden of blasphemy in these two of three of his works featured in “Turn the Page: The First Ten Years of Hi-Fructose,” an exhibition at The Virginia Museum of Contemporary Art (MOCA). Loyola called the works “anti-Christian and anti-Catholic” and threatened to slash the museum’s funding for promoting “anti-Christian bigotry.” The museum, with an annual operating budget in the neighborhood of $2 million, gets $120,000 a year from the commission. The head of the Catholic League, Bill Donohue, chimed in with an open letter targeting museum director Debi Gray.

Results of Incident: Despite threats from the commissioners, no action has been taken to de-fund future exhibitions at Virginia MOCA. The paintings were not removed from the exhibition.

Open Letter from the National Coalition Against Censorship, May 20, 2016

Virginia Arts Commissioners Threaten to Defund Museum Over “Anti-Christian” Paintings, by Claire Voon on May 20, 2016

Gallery statement: "We (Paul Kasmin Gallery) fully support MOCA and the position of the curators Alison Byrne and Heather Hakimzadeh and their plan for the paintings to remain on view in the exhibition. We also endorse and appreciate the statements made by the NCAC."