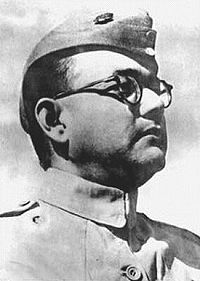 Description of Artwork: Bose was an outspoken Indian Nationalist. During World War II he made anti-British radio broadcasts from Germany and Japan.

The Incident: Bose was first arrested in 1924 and again in 1932-1933 for plotting to overthrow the British colonial government. No charges were ever brought against him. During his house arrest he was forbidden to communicate with anyone except family members.

Bose was elected to the Indian National Congress in 1939 but left to form the Forward Bloc, within the congress, to advocate Indian independence. The Forward Bloc was banned from the Congress by 1940.

During the war Bose made anti-British radio broadcasts from Germany and Japan and organized the Indian National Army.

Results of Incident: Britain censored Bose's writings and correspondence in addition to banning his movement through government institutions and public radio. Bose supposedly died in a plane crash in Japan in 1945, however, his disappearance has been contested.