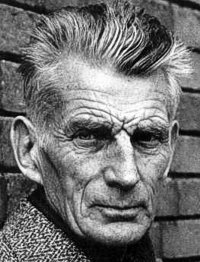 Description of Artwork: Beckett has written many popular plays. His most famous, Waiting for Godot, has been accused of blasphemy and has been challenged for its language. Many of his other works have been attacked for their sexual innuendo.

The Incident: Beckett's history of censorship lasted throughout his career. In 1934 his play, More Pricks than Kicks, was banned in Ireland. In 1937 he moved to Paris to escape the censors. A Parisian magazine edited an essay of his in 1953 because it feared prosecution over a reference to a handicapped man's penis. Two of his plays, Watt and Molloy were banned in Ireland during the 1950s. In response to the cancellation of a planned adaptation of James Joyce's Ulysses at the Dublin International Film Festival in 1958, Beckett repealed permission granted to feature his play, All that Fall. Beckett was forced to change numerous words and scenes in Waiting for Godot. The words arse, bastard and balls were removed, in addition to scenes that were considered blasphemous by the Lord Chamberlain.

Results of Incident: On some occasions Beckett gave in to the censors, however, he was known for his obstinance against changing his work. Many of Beckett's plays were performed uncut in France, Germany and the United States. In 1967 the Lord Chamberlain lost censorship duties and ,having earned international recognition, Beckett did not suffer from further censorship.