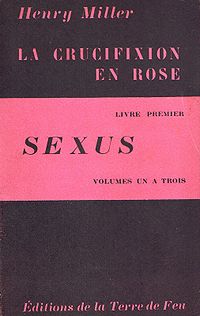 Description of Artwork: This is the first book in Miller's The Rosy Crucifixion trilogy; Plexus and Nexus complete the narrative. The trilogy tracks the course of Miller's life from 1928 to 1930, in which he divorces his first wife, Mona, and leaves to live in France. Sexus is notable for its explicit sex scenes.

The Incident: The first French edition published in 1949 was not made available for general distribution, and was distributed privately only by the publishers.

Results of Incident: In 1968, the ban on the book was lifted in France.