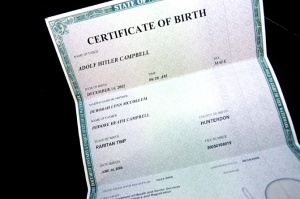 Description of Artwork: A birthday cake with the name "Adolf Hitler" written on it

The Incident: As Adolf Hitler Campbell neared his third birthday, the Campbell family went to their local ShopRite to have a birthday cake made. When they requested his name, "Adolf Hitler", be written across the top, Shop-Rite personnel denied them service and refused to make the cake. They offered to leave room on the cake for the family to write the name themselves, but the Campbells refused and took their business to Wal-mart instead. ShopRite also denied service to Hitler's sister, JoyceLynn Aryan Nation Campbell, who has a birthday two months after him.

Results of Incident: The Campbell family was outraged by ShopRite's response and took their business to the local Wal-Mart instead, who has made their last three birthday cakes in previous years. Wal-mart stated in an interview that they won't write anything profane or illegal on a cake but they feel that it is important to respect the views and opinions of their customers. No legal actions have been taken by the Campbell family. ShopRite's actions were applauded by the local Anti-Defamation League's director, Barry Morrison.