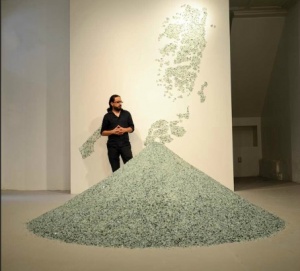 Description of Artwork: The exhibition is a completion of a cooperative multimedia project featuring the work of three Israeli, three Palestinian and five American artists.

The Incident: According to the museum, the exhibit was canceled because the three Palestinian artists (Bashar Alhroub, Manal Mahamid and Mohammed Mussalam) withdrew their participation. The Israeli artists (Emmanuel Witzthum, Dror Yaron and Itamar Jobani) had pulled out of the show one day previously in order to protect the Palestinian artists who had been threatened and accused on Facebook of “normalizing relations with Israel”. The Israeli artists pulled out so to allow the Palestinians to remain in the show.

Tavia La Follette, the independent curator of the exhibit said that the trigger for the threats was the use of the words “collaboration” and “dialogue” within the exhibition’s announcements on the websites of the Mattress Factory and Filmmakers Galleries. But according to La Follette those words were never approved by La Follette or the artists in the exhibition.

La Follette said that “There’s language that was put up on the websites that are words used in the land of art all the time,”. “In the art world, ‘collaboration’ and ‘dialogue’ are used all the time. But ‘collaboration’ means something completely different politically. That’s where the problem started.”

Results of Incident: The exhibition was cancelled.