Description of Artwork: Socrates is described as having "laid the philosophical foundation of Western culture." He directed philosophical thought toward analysis of the character and conduct of human life, which he assessed in terms of an original theory of the soul. He is remembered for his admonition to 'Know thyself.' Socrates himself wrote nothing. Information about his personality and doctrine is found chiefly in the dialogues of Plato and the Memorabilia of Xenophon. 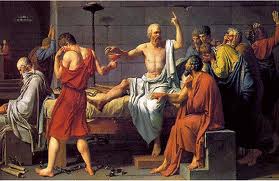 The Incident: 399 B.C.E.: Socrates is accused "firstly, of denying the gods recognized by the State and introducing new divinities, and secondly of corrupting the young." Found guilty, he was condemned to death. Accounts of the events are found in Xenephon's Memorabilia and Plato's Apology. The western history of censorship is said to begin here.

Results of Incident: Although Socrates left no writings, his forthrightness as teacher and philosopher exposed him to punishment of the State.