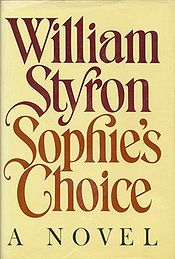 Description of Artwork: Sophie’s Choice is a widely acclaimed novel by Pulitzer Prize winner Styron dealing with the grueling experiences of a Holocaust survivor. It received the National Book Award and was also made into an Oscar-winning film.

The Incident: Following the complaint by a student’s parent about the sexual passages in the novel, Andrew Huynh, principal of La Mirada High School, ordered removal of copies of the book from the scholl library and its approved list of literature on September 17, 2001.

Results of Incident: The American Civil Liberties Union of Southern California and the National Coalition Against Censorship have informed local attorneys about the censorship case and sent a letter to the school administration urging them “to respect the First Amendment as well as the intelligence of students” and to return the novel to the library. These actions prompted the administration to return the book to the the library shelves.