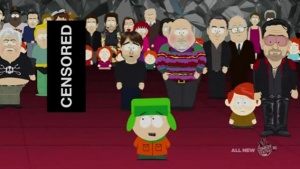 Description of Artwork: To mark its 200th episode, South Park creators Matt Stone and Trey Parker created an episode in which some of the most commonly lampooned celebrities on the show, such as Tom Cruise, Barbara Streisand and Jesus, assembled to sue the town unless they could produce the prophet Muhammad. In the following episode, Muhammad appears first as obscured by a U-haul truck, then in a bear costume. At the end of the episode, there is a speech "about intimidation and fear."

The Incident: After the episode aired, Abu Talhah Al-Amrikee wrote a post on radical Islamist website revolutionmuslim.com, which stated that "We have to warn Matt and Trey that what they are doing is stupid, and they will probably wind up like Theo van Gogh for airing this show" (Theo Van Gogh was a Dutch filmmaker who was murdered by an Islamic militant for creating a film about the oppression of women in some Muslim countries). Many news outlets interpreted this as a threat, as did Comedy Central, the network which broadcasts South Park.

Results of Incident: Parker and Stone censored some of the episode by placing an audio bleep whenever his name was said, and hiding the character of Muhammad, whenever he appeared, under a censor bar. After the show had been delivered to Comedy Central, the network placed numerous additional bleeps throughout the show, and even censored the entire final speech in one continuous bleep. The speech according to Stone and Parker, "didn't mention Muhammad at all." In a later rerun of the episode, Muhammad is replaced by Santa Claus when the bear suit is opened.