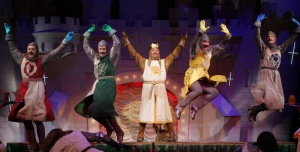 Description of Artwork: Monty Python's Spamalot is a musical comedy adapted from the 1975 film Monty Python and the Holy Grail. Like the film, it is a highly irreverent parody of the Arthurian Legend, but it differs from the film in many ways.

The Incident: The theater director, Dawn Burch, had arranged the rights to stage “Spamalot” spring 2015 at South Williamsport Junior-Senior High School, and the school’s principal, Jesse Smith, had signed a $1,935 check in May 2014 to cover the theatrical licensing fee. One month after that, Smith sent an email to Burch, that he's not comfortable with `Spamalot´, because of its homosexual themes. Smith also said he didn’t want “families to be afraid of bringing small kids because of the content,” nor students forced “to choose between their own personal beliefs and whether or not to take part in a production.” After Burch continued defending the play, the school district’s superintendent, Mark Stamm, strongly defended Smith and his position. Also Stamm said that “Spamalot” was never officially approved as the school musical, although there's evidence of the check with the payment for the musical. Several days later Burch got dismissed because of “job performance” issues. Smith and Stamm did not return phone and email messages requesting details about Ms. Burch’s status at the high school and comment on “Spamalot.” The school board’s president, John Engel, also did not respond to phone and email messages.

Results of Incident: The School got heavily criticised for its behavior.

“Spamalot” and Ms. Burch’s dismissal are not on the school board’s agenda for Monday night’s meeting, and it is unclear if either will come up.

Among those protesting the cancellation of “Spamalot” have been the Dramatists Guild of America, which represents playwrights and musical theater composers and lyricists, and the National Coalition Against Censorship, which sent letters to South Williamsport school officials.

“Would you cancel a school production of ‘The Diary of Anne Frank’ because of concern over the sensitivities of Holocaust deniers and those with anti-Semitic views in your community?” wrote Stephen Schwartz, the composer of “Godspell,” “Pippin,” “Wicked” and other musicals, and the president of the Dramatists Guild. “That seems unlikely. Why then are you so solicitous of homophobia?”

The school district has not made any public responses to these letters.