State of the Union (exhibition) 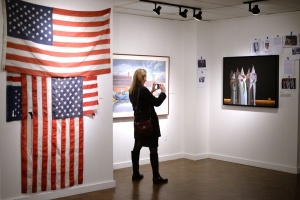 Description of Artwork: The exhibition “State of the Union” opened the day after the 2016 U.S. presidential election at the university’s Winfisky Gallery. 19 artworks created by 13 artists from across the region were selected from an open call for works that reflect "concerns and hopes for our future" in post-election America, according to a statement by gallery curator Ken Reker.

The Incident: The university temporarily closed the exhibition over Thanksgiving weekend after a group of students complained that they found several of the works hurtful and offensive. The piece that created the most controversy was a painting by Garry Harley that depicts members of the Ku Klux Klan, "Meeting Under A Black Moon in the Plains of Despair." Students mistook the representation as a pro-white supremacist work, when in fact it was intended as a critique of Trumpism. A closed-door meeting with fifty students was held the Monday after Thanksgiving to discuss how to move forward.

Results of Incident: The university decided to reopen the exhibition with several modifications, including contextualizing signage; the painting 'Meeting Under A Black Moon in the Plains of Despair' was cordoned off behind a drape.

Salem State President Patricia Meservey stated in a press conference that the decision to reopen the exhibition is based on the university's commitment to upholding principles of academic freedom and freedom of expression:

"These freedoms include: the scholarship of the curator; the expression of art by the artists; and the right to express dissenting and supportive views by the people who observe the work. […] We acknowledge that we could have done more to prepare our community. The overall outcome of the show offers gains for both those concerned about the exhibit and those concerned about freedom of expression, and builds on our approach all along: creating dialogue." (from Marblehead Wicked Local, Nov 29, 2016)

When Art Offends (and Isn't Understood) - Salem State invited artists to create works inspired by election. Several paintings, created by critics of Trump, were intended to draw attention to oppression. But minority students were offended -- and university shuttered exhibit. By Scott Jaschik, Inside Higher Ed, Nov 28, 2016