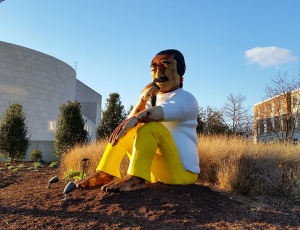 Description of Artwork: The statue of Leonard Peltier, created by Los Angeles-based Portuguese artist Rigo 23, is based on a self-portrait of American Indian Movement activist and long-term prisoner Leonard Peltier. It was created to raise awareness of Peltier's Native American activism, artistry, and his 41 years in prison. The statue is of polychromed redwood and steel, and stands nine feet tall on a base measuring six feet by nine feet, modeled to match the dimensions of a standard prison cell.

The Incident: The sculpture was installed December 9, 2016 in front of the American University's Katzen Arts Center and scheduled to remain through April 30, 2017. However, soon after, articles appeared in conservative news outlets criticizing American University for what they believed to be its support of a cop killer. Seeking to clarify that this was not the case, AU issued disclaimers. Then, on December 29, AU received a letter from the Federal Bureau of Investigation Agents Association that accused the University of making a political statement advocating for clemency for Peltier while presenting a one-sided version of his story. They called for the immediate removal of the sculpture. Shortly after, on January 3, the sculpture was dismantled and removed.

Results of Incident: In a public statement, AU justified the sculpture’s removal on the grounds that the nature of the work and its prominent placement “suggested the University has assumed an advocacy position of clemency for Mr. Peltier, when no such institutional position has been taken.” AU also cites safety concerns based on credible threats to the integrity of the artwork. On February 16, 2017, NCAC sent a letter to the director of the Katzen Center, pointing out that the Katzen Center has successfully presented difficult and controversial subjects in the past, and that by removing the Peltier sculpture it undermined its commitment to academic freedom and its support of “human rights, social justice, and political engagement,” setting a bad precedent for exhibiting political artworks in the future. In its letter, NCAC invoked the 1990 Wolf Trap statement https://ncac.org/resource/1990-wolf-trap-conference-on-academic-freedom-artistic-expression-statement on artistic freedom on campus, endorsed by the American Association of University Professors, the American Council on Education, and the Association of Governing Boards of Universities and Colleges, among others, makes clear that academic institutions are not responsible for—and hence do not necessarily endorse—the views or attitudes expressed in specific artistic works they display any more than they would be for the content of other instruction, publication, or invited speeches. The statement also affirms that artistic expression merits the same assurance of academic freedom that is accorded to other scholarly and teaching activities.

In February 2018, Rigo 23’s sculpture found a temporary home at The Main Museum in downtown Los Angeles, remaining on view through May 13th.

Artist Questions Freedom of Speech After American University Takes Down His Statue - Artist Rigo 23's controversial statue of Leonard Peltier has drawn threats to the campus and criticism from the FBI., MATT COHEN JAN 4, 2017 4 PM

Anger at a cop killer, a plea for clemency, and a fight over free expression at American U., By Susan Svrluga, Jan. 4, 2017

American U Will Remove Statue of Leonard Peltier, By Scott Jaschik