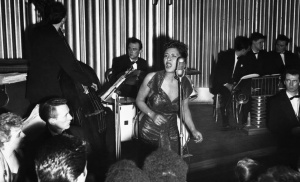 Description of Artwork: "Strange Fruit" is a song performed most famously by Billie Holiday, who first sang and recorded it in 1939. It first appeared as apoem in 1937 under the title “Bitter Fruit” in the union publication The New York Teacher, having been written by a New York City public school teacher, Abel Meeropol. Set in the rustic loveliness of the “gallant South”, the poem provided a description of a “black body swinging in the southern breeze” with “the bulging eyes and the twisted mouth”; the scent of magnolia is supplanted by the stench of burning flesh. Meeropol set the poem to music. It protests American racism, particularly the lynching of African Americans. “Strange Fruit” has been called the original protest song.

In early 1939, Billie Holiday was performing in the newly-opened nightclub Café Society in lower Manhattan. Meeropol asked Barney Josephson, the owner of the club, if Holiday would sing it. She sang it to a stunned audience that broke into applause.

Holiday asked her label, Columbia, to record it but they declined, fearing a backlash. She went to Commodore Records; accompanied by her eight-piece Café Society band, they recorded it in a single afternoon. “Strange Fruit” would become her biggest hit and signature track.

The Incident: The song was blacklisted. Performance of the song was banned in some US cities for fear of provoking civil unrest. It was blocked From U.S. Radio stations.