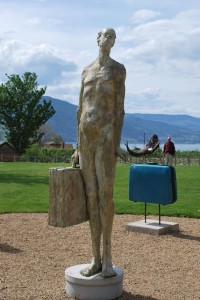 Description of Artwork: The sculpture depicts a nude male figure carrying a suitcase.

The Incident: After the City publicly displayed The Baggage Handler in a traffic circle in Penticton, the sculpture faced multiple incidents of vandalism including being pushed off of its base and severing his genetalia.

Results of Incident: Hermesh requested $20,000 to repair the damaged sculpture; however, the city council decided to remove the scupture and gave the artist $300 to cover moving costs. A local band, Shaker Green, wrote a song about the sculpture entitled, Frank the Baggage Handler. The sculpture could possibly be relocated to one of numerous companies who have expressed their desire to have the scultpure.