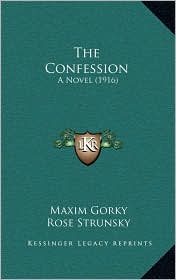 Description of Artwork: Maksim Gor'kii's work earned him the title as the founder of "socialist realism" literature from Lenin and Stalin. His vagrant life as an orphan and his experiences in the Russian intellectual scene are documented in his three-part autobiography. Among his earlier works are two books of short stories that made him famous in his country. Most of his books were commentaries on the turbulent Russian political landscape of his time, whether they were fiction or non-fiction, including The Confession (1908).

The Incident: The Confession (1908) was Gor'kii's attempt to found a new popular religion, reconciling socialism and Christianity. This earned the disapproval of Lenin and the Bolsheviks and later was censored for being politically incorrect.