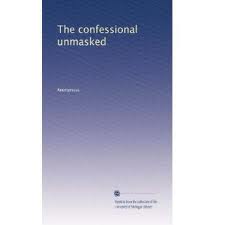 Description of Artwork: The Confessional Unmasked was a pamphlet put out by the Protestant Electoral Union with the purpose of exposing the immorality of the practice of hearing confessions. The pamphlet was made up of the works of various Catholic theologians and contained descriptions of sexual concerns women confessed to priests.

The Incident: The Obscene Publications Act of 1857 gave the police of England and Wales the power to seize material they believed to be obscene and to get permission for the destruction of these materials from magistrates. The Confessional Unmasked was seized under this law but an appeal was made by the recorder, Benjamin Hicklin on the grounds that it was not intentionally obscene, that its intentions were to unmask immorality, and that only parts of the book were obscene. The court, however, upheld the order for destruction of the pamphlet. Out of this case came an important definition of obscenity made by Justice Cockburn who said "I think the test of obscenity is this, whether the tendency of the matter charged as obscenity is to deprave and corrupt those whose minds are open to immoral influences, and into hands a publication of this sort may fall." This definition, though unclear, was adopted not only in England but in the United States, Australia, New Zealand, South Africa, and India. The order for destruction did not stop people from selling The Confessional Unmasked and in 1870 a lecturer employed by the Protestant Union, George Mackay, was prosecuted for selling the pamphlet. The Union then went on to publish A Report Of The Trial of George Mackay with a new issue of The Confessional Unmasked included. These were seized and destroyed in 1871 by police.

Results of Incident: It is not known whether the pamphlet continued to circulate after their seizure in 1871, but the court decision that originally ordered the pamphlet's destruction came to be known as the "Hicklin Rule" and had lasting importance.