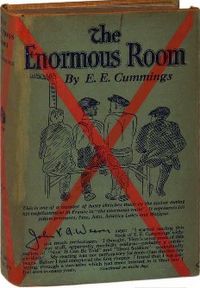 Description of Artwork: In The Enormous Room, E.E. Cummings' first prose, he tells of the censorship and subsequent internment that he faced during World War I. The Enormous Room was written in a very modern style of prose and was much admired by Cummings' fellow writers, such as Hemingway. In an introduction to the 1934 edition of the book he says that The Enormous Roomwas meant to be a damning critique of those who "hate by categorying and pigeon-holing human beings".

The Incident: E.E. Cummings, along with many other writers, went to World War I as an ambulance driver. In avoiding combat, Cummings hoped to avoid facing strict military discipline. This was not true, however, and he soon grew frustrated and angry with the military authority. Cummings soon became aware that his letters back home were being stopped. Cummings' close friend, William Slater Brown, wrote letters telling of the disillusionment on the front and the mutinies that occurred. This led to his arrest, and Cummings' shortly afterward. Both men faced horrible conditions during their internment, which Cummings describes them in The Enormous Room.

Results of Incident: The book was much admired during this period of expose and honesty after the war.