The God of Vengeance 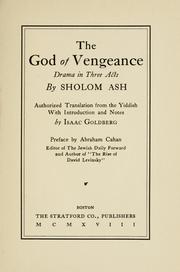 Description of Artwork: Asch's play, The God of Vengeance, is the story of a young Jewish girl, Rivkele, who falls in love with a prostitute that works for her father's brothel. The play boasts the first on-stage lesbian kiss.

The Incident: "The God of Vengeance" was attacked by critics when it premiered in New York City in 1922. It was called "ugly, sordid and repellent beyond any play that has yet been presented on the contemporary English-speaking stage," and "hopelessly foreign to our Anglo-Saxon taste and understanding." The play was closed and the producer, director and 12 actors were arrested. A jury found them all guilty of presenting an indecent play. The producer and director/lead actor, Rudolph Schildkraut, paid $250 fines; their prison sentences, in addition to those of the other actors, were suspended.

Results of Incident: The play has been translated into nine different languages. When the Jewish Repertory Theater revived the play in 1992, it recieved similar complaints.