The Last of the Believers 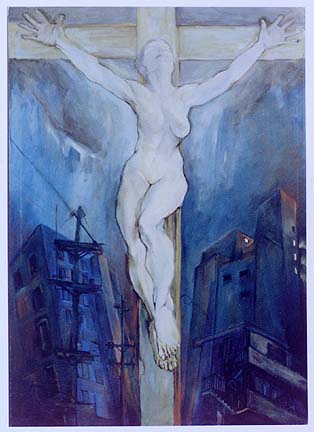 Confronting Bodies: The city of Honolulu; Honolulu Mayor Jeremy Harris; the Mayor's Office of Culture and the Arts

Description of Artwork: The Last of the Believers depicts a nude woman nailed to a cross. Fand said those who see her painting can draw their own ideas about what the oil-on-canvas painting means. The artist says, "I think in general, I could say that I'm trying to call attention to the sacrifice that women often make in relationships, their families or in their jobs and often feel a sense of martyrdom".

The Incident: A resident of Honolulu, Daria Fand's painting, The Last of the Believers was supposed to be a part of the city's Women of Art exhibit at Honolulu Hale in March 2001; but, at the last minute, the painting was banned from the show. According to the American Civil Liberties Union (ACLU), the Mayor's Office of Culture and the Arts found the piece to be too controversial and religiously offensive.

Results of Incident: The ACLU took action, filing a lawsuit against the city stating Fand's painting was wrongly barred from display. One of the secondary goals of the lawsuit, says local ACLU director Brent White, is to "prevent future censorship by this city at future art shows." The court found in Fand's favor and The Last of the Believers was displayed in the following year's Women of Art exhibit.