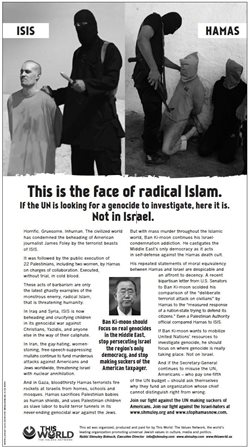 Description of Artwork: Advertisement headed "This is the face of radical Islam" with two pictures next to one another depicting murders done by members of Isis and Hamas. Both Murders are holding knives, showing the moments before the killings of their victims.

The Incident: The New York Times censored an advertisement by the pro-Jewish group, The Values Network, that displayed two pictures depicting execution acts done by members of Hamas and Isis. Rabi Boteach, who heads the pro-Jewish group, claims that The New York Times said they would only print the advertisement if the Isis picture was changed to the murderer not holding a knife while killing American journalist James Foley. Boteach condemns The New York Times by accusing them of denouncing the government while also suppressing the "horrors of the world's most monstrous terror organization that decapitates Americans."

Results of Incident: Rabi Boteach not only makes claims against the censorship done by The New York Times, but also The Los Angeles Times and The Times of London. The New York times chose not to display the work of The Values Network, crippling their reputation as an honest and reputable news paper that does not alter their pictures to shield the publics understanding on a serious issue.