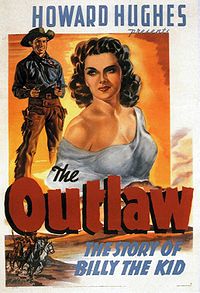 Description of Artwork: The Outlaw is a film focusing on Billy the Kid and his love triangle between Rio, the female romantic lead, and Doc Holliday.

The Incident: In 1940 the PCA disapproved the film over the implied rape of Rio by Billy and the open sexual relationships she shared with both Billy and Doc. Above all, the last third of the movie featured Rio (played by Jane Russell) in a low cut blouse, exposing cleavage. The PCA denied giving Hughes their seal of approval. After numerous meetings with the PCA, Hughes went to the MPDDA, who agreed to give him the PCA seal if he deleted about a minute of footage from the movie.

He did not release the film until 1943. Promotional billboards read, "SEX HAS NOT BEEN RATIONED," and "How would you like to tussle with Russell," while showing Russell wearing her famous blouse. Critics quickly deemed it immoral, but the movie was a major success.

He re-released the film in 1946 and again it was a hit, even in religious areas such as Kansas City.

Results of Incident: In 1947 the film was blocked from all PCA theaters due to Hughes not holding up the agreement. However, he still played the film at art houses and independent theaters, as well as seeing an easy, uncut release in Europe. The Outlaw continued its success, despite lack of a PCA seal.