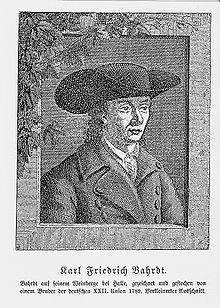 Description of Artwork: Bahrdt was known for advocating free expression as a fundamental right of men and challenging Christian dogma.

The Incident: His treatise, On Freedom of the Press and its Limits, describes freedom as the "jewel of all thinking beings and the nobility of mankind." He suggested that people must find religion for themselves through free thought and expression rather than blindly following their church leaders. Bahrdt wrote a play satirizing the German king called The Religious Edict. The play challenged the suppression of speech and expression. Barhdt was imprisoned for the production of this play.

Results of Incident: Barhdt was released from prison after one year. It is believed that his release was granted by the king's chief minister so that Barhdt would not be viewed as a martyr.