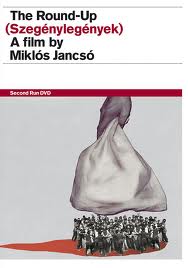 Description of Artwork: The Roundup, (Szegénylegények) is a story that takes place in 1869, after the defeat of the anti-Austrian uprising. The police round up the remaining guerrilla outlaws on the Hungarian plains and work to destroyed the rebels' trust in each other. They offer promises of acquittal to further persuade them. At the end of the film, the police identify the active rebels and hustle off those remaining to be executed.

One popular reading of the film is its focus on demythicizing the outlaws as courageous freedom-fighters by portraying the rebels as dirty thugs. However, a totally opposite reading can link the film to the 1956 Hungarian uprising, which was also suppressed. With this theory, the film represents those in power maintaining their position through violent, dictorial means by showing the cold, cruel mechanisms the oppressors use to keep control.

The Incident: Seeing the possible political message, bureaucrats tried to play down the legitimacy of this interpretation. They gave the party newspaper orders to only give the movie bad reviews. They also forced the director to make a statement that his film had nothing to do with the 1956 uprising (which actually brought attention to that fact.)

Results of Incident: When the film gained international acclaim, the bureaucrats needed to change their strategy. They praised the film but tried to shift focus from the theme of the oppressors to the debunking of the mythology of the rebels, making that into the only correct interpretation.