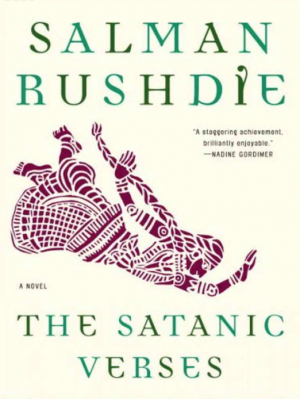 Description of Artwork: The Satanic Verses is an extremely controversial novel written by Salman Rushdie. The book is set in a modern world and begins with a terrorist bombing on a London-bound jet while inflight. Two Indian men fall to earth and are transformed into living symbols for what is good and what is evil. The book uses elements of magical realism to tell the story of the two men and their return to India.

The Incident: The Satanic Verses controversy, also known as the Rushdie Affair, was the vehement and violent reaction of Muslims to Salman Rushdie's novel. The protests against the book began with its title. The title references a legend of the Prophet Mohammad when verses were supposedly spoken to him as part of the Qur'an and then withdrawn as it was believed that the devil had sent them to deceive him into thinking they had come from God. People also took issue with the use of the name Mahound, which was said to be a derogatory term for Muhammad which was used by the English during the Crusades. Muslims were also disturbed by the fact that Abraham was called a "bastard" for casting Hagar and Ishmael in the desert. The book was thought to be offensive, sacrilegious and blasphemous. In 1989, the Ayatollah Ruhollah Khomeini of Iran issued a fatwa, ordering Muslims to kill Rushdie or other individuals related in the publishing of the controversial novel. There were many attempted and achieved killings as well as violent and destructive bombings which occurred as a result of the fatwa.

Results of Incident: Because of the fatwa and the countless threats to his life, Salman Rushdie went into hiding for years. The Iranian government maintained the fatwa against Rushdie until 1998 when the succeeding government of President Mohammad Khatami said that he no longer supported the killing of Rushdie.

The Controversial Elements of The Satanic Verses