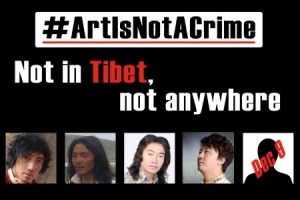 The Incident: The government of China is holding (at least) five Tibetan musicians, Lo Lo, Shawo Tashi, Kelsang Yarphel, Gonpo Tenzin and Trinley Tsekar, in prison for singing and writing Tibetan songs. The Chinese government uses the charge “seditiously splitting the state” to arbitrarily arrest and imprison anyone they see as a threat. Many of these artists are serving sentences of up to nine years for singing and writing songs or participating in peaceful protests in support of the Dalai Lama or Tibetan independence. Some are reported to suffer from severe health problems due to mistreatment in Chinese custody.

Freemuse calls for the release of five Tibetan musicians imprisoned for their art, freemuse, December 2016

Unsung Heroes: Since 2012, China has jailed eleven Tibetan singers after they wrote and performed songs celebrating Tibet, opposing China's occupation and calling for freedom. In December 2013, one of them - Trinley Tsekar - was sentenced to nine years in prison Free Tibet