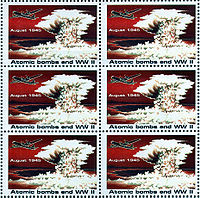 Confronting Bodies: Government of the Empire of Japan

The Incident: Government of the Empire of Japan protested, alleging that the A-bomb dropping at Hiroshima and Nagasaki were not normal acts of war but racially motivated genocide - an obvious crock, since the victorious Allies did not exterminate the vanquished Japanese.