We Keep Our Victims Ready 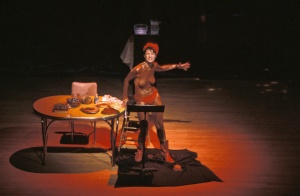 Confronting Bodies: The National Endowment for the Arts

Description of Artwork: In this piece of performance art, Karen Finley exposed her body and many aspects of the human body that we, as a society, try so hard to ignore or hide. Smearing chocolate cake across her bare chest and wearing only panties and a red bandanna, she delivers a series of monologues about artistic, sexual, emotional and political abuse.

The Incident: The performance generated a lot of excitement and controversy. A group which called itself the Traditional Values Coalition took issue with the piece and planned to protest at one of its performances, but did not follow through. Due to congressional debate and political dissent, John Frohnmayer, chief of the National Endowment for the Arts, decided to veto the NEA grant awarded to Finley.

Results of Incident: In 1991, a lawsuit was brought against the NEA after its chairman, Frohnmayer, rescinded grants for four performance artists out of fear of criticism from conservative media representatives and politicians. The four artists who were denied grants joined together to sue Frohnmayer. Referred to as the "NEA Four", they are: Karen Finley, Tim Miller, John Fleck, and Holly Hughes--three of the rejected artists are gay and deal with homosexuality in their work; the fourth, Karen Finley, is an outspoken feminist. In 1993, courts ruled in their favor and all received compensation surpassing their grant amounts.

STAGE REVIEW : Finley Exposes Plenty in 'Victims' : The performance artist's 'We Keep Our Victims Ready' exhibits a kind of purposeful schizophrenia as it uncovers the nastiness we would rather sweep under the rug.