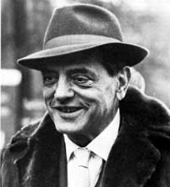 Description of Artwork: Bunuel's film An Andalusian Dog is a mix of violent imagery and sexual frustration, opening with a man on a balcony slitting open a girl's eye. The Golden Age attacks religious groups.

The Incident: An Andalusian Dog was removed from French theaters in 1929 even though it was well recieved. The owners of the Cinema des Ursulines told Bunuel that they feared the French censor's reaction.

The Golden Age was protested by right-wing Jewish and Christian organizations in December 1930. Police asked the managers of Studio 28 to remove two parts of the film, and the film was allowed to continue showing. Later that month police confiscated all copies of The Golden Age.

A film that he made in Mexico 1950 depicting working-class brutality was met with hostility from Mexicans and banned after four days.

Results of Incident: Bunuel was sent to the Spanish embassy in Paris to produce propaganda films. During World War II he worked for the Museum of Modern Art in New York, dubbing anti-Nazi films for distribution in Latin America.